An Atlantan in the Bay: Won’t You Be My Neighbor?

It’s rare that I give five stars for somewhere, but this place really, hands down, has some of the best pastries. It could be because they have savory pastries which cater more to my palate as I don’t indulge in sweets too often.   Got to come here as a pre-treat before my birthday lunch thanks to WenLeeLee and Nick.  So much friend love. But truth be told, their pastry selection is solid. The things we tried included the following:

CONS:
– barely shareable: Maybe between two people, this can be ripped in half, but if you like savory pastries, you can probably easily kill 2 of these on your own. 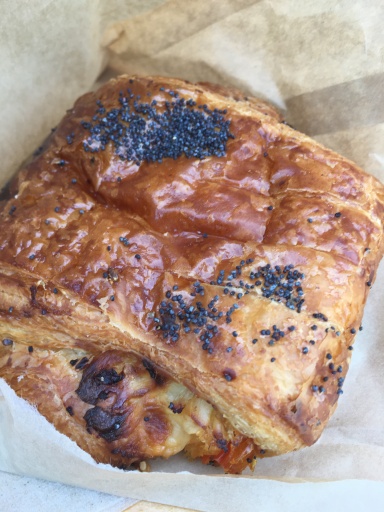 Savory Morning Bun
PROS:
– good amount of seeds: I like seeds, they’re good for you but they are also a con (see below)
– not dry, good flakiness to the dough as well

CONS:
– slightly drier than the cheddar chorizo pastry: could be because that was more of a croissant dough and may have had more butter. On that note, this is probably healthier.
– seeds (too much for me): I personally do not like too many seeds because they get stuck all over. The coffee did help to wash it down, but for someone who has tight cheeks like me, my tongue ends up doing extra work to try and get it out. 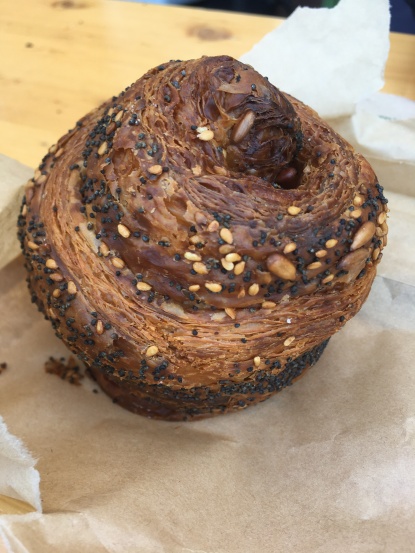 The selection of pastries is amazing. They literally had a rack right behind the counter of fresh pastries coming right out of the oven. It’s definitely worth going. They also open early so get there early because reputation usually lends itself to selling out of the good stuff. Parking wasn’t too bad when we went but then again, the early bird gets the worm. Service is relatively quick – most things are served immediately if they are behind the counter. Beverages that take some time to custom order get called out or sometimes served. There is outdoor seating which can kind of get a little chilly, but it’s spacious still. The area is cute and clean, given that it’s Dogpatch it may be “out of the way” for some people, but definitely worth the drive.  All in all:

Check them out here:

Like Loading...
16 Dec This entry was published on December 16, 2018 at 13:30. It’s filed under American, bakeries, North America, series, The Gastronome, The Traveller, USA and tagged bakeries, morning bun, pastry, San Francisco bakeries, savory pastry. Bookmark the permalink. Follow any comments here with the RSS feed for this post.