One of the things I really wanted to try was ramen.  There is a very large population in California, particularly the Bay Area.  In addition to shopping my heart out at Daiso and getting cutsy Japanese items for $1.50 or less, I got to eat some pretty legit ramen.  We went out to Santouka Ramen in the Mitsuwa Japanese grocery store near north San Jose where my other friend E met us after work on Friday night.  He recommended getting a salmon bowl combo as well.  That being said, I ordered the following: 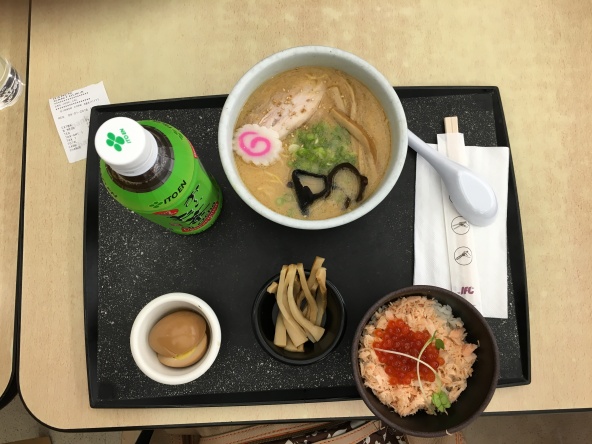 Salmon Bowl: small bowl with steamed or cooked salmon, minced and shredded on top, and served with salmon roe.

Oh man, I really think that if the broth wasn’t so salty and they had one more piece of pork, it would have been spot on for me.  Admittedly, we had another friend with us that felt its neighbor, Kahoo Ramen, was by far better.  Guess I’ll just have to come back to try that!  All in all I give this combo ***.85 (3.85 stars).  The salt really did it for me.  You can find them here:

Like Loading...
04 Apr This entry was published on April 4, 2016 at 18:47. It’s filed under Japanese, ramen, restaurants, series, The Gastronome, The Traveller and tagged Japanese Cuisine, Japanese food, miso ramen, ramen, salmon bowl, San Jose restaurants. Bookmark the permalink. Follow any comments here with the RSS feed for this post.