This is the third and final post for this series of desserts, particularly ices.  After a great dinner at Chai Pani, B.G. recommended that we try Butters & Cream.  It was a ten-minute walk from Chai Pani and since we had a five-year-old with us for the night, it was a great way to end the meal.  This time I did try two flavors:

Sage Caramel: I really love this flavor.  For some reason, my tastebuds really like the combination of herb and sugar.  Most of the time, herbs are associated with something savory or salty, but recently, these new twists on ice-creams have really set off my love of the salty-sweet combination.  It’s like Wendy’s frosty dairy dessert and their french fries.  Great combination.

The sage goes really well with the caramel.  For one, the caramel is not overwhelmingly sweet, and the sage doesn’t overpower its counterpart as well.  It’s a bit sweeter and more indulgent than the Lavender Honey Fig but it was probably my favorite out of the two tonight.

Lavender Honey Fig: Fresh figs are one of my favorite fruits to eat.  This being said, I really liked being able to taste this flavor before choosing it as one of my two scoops.  I didn’t really taste the lavender as much though which was a bit surprising.  I think it would have brought out the flavor of the fig a little better.  However, now that I think about it, this may be more of a “honey fig”, utilizing only lavender honey.  It’s really difficult to detect the lavender in lavender honey as is so I can see how it would be a bit difficult to detect it in the ice-cream.

I think after the three posts, this would be my second favorite.  I really do like that sage caramel flavor though.  Butter & Cream can be found in downtown Decatur at this address:

Everything is made in-house which is fabulous.  They also have sorbets for those of you who happen to be allergic to dairy.  Here’s a quick picture of all the flavors that they had that day. 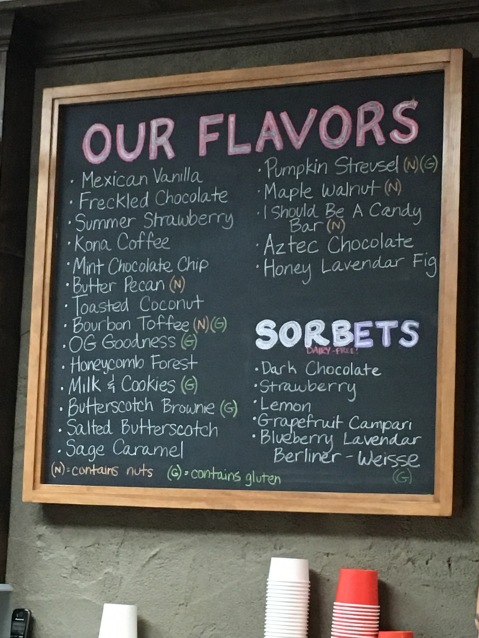 flavors of the day

If you get a chance to try all three places in this series of ice-creams and gelato, shoot me a line and let me know what you think!  Thanks so much for reading.  Hopefully you all will have a great Thanksgiving weekend filled with wonderful food.  The next couple posts will try to highlight a few of the dishes that I will be making this weekend starting tomorrow.  Be safe on the roads and remember all that we have to be thankful for!

Like Loading...
25 Nov This entry was published on November 25, 2015 at 20:49. It’s filed under desserts, ice-cream, series, The Gastronome and tagged Atlanta, Decatur, desserts, ice-cream, ice-cream parlors. Bookmark the permalink. Follow any comments here with the RSS feed for this post.