I made this dish for a Canadian Thanksgiving dinner that my friends Aamir and Jeff threw earlier in October (yes I’m that behind).  Truthfully, this was an experiment, and I was praying that it would turn out well.  I have to say, it is a very hefty mac-n-cheese and it can potentially pack some heat.  Someone said it was like a mexican-italian mac-n-cheese which, I guess I can see, but it was pretty successful!  I think total weight it came out to about 7-8lbs though.  Hey, us Asians cook to feed!  Anyways, I hope you enjoy this recipe!

Boil the pasta until a little more than al dente in salted water.  Drain and remove. Place in disposable casserole pan if you have one or your casserole dish that you plan on serving the mac in.

Take the sliced spicy Italian sausage and saute in a pan until cooked through.  Remove from pan and leave leftover oil and grease.  Cook the bacon until extra crispy in the same pan. 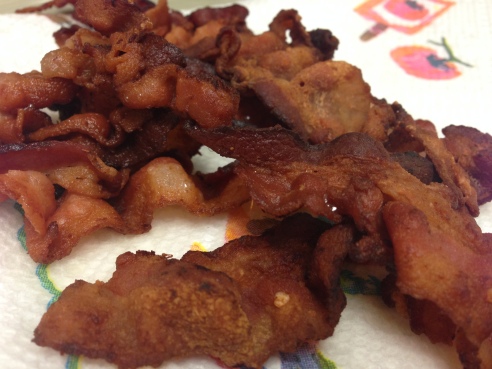 Use the remnants of the grease to saute the jalapeños and then remove.  You can either add this to the sausage or discard.  Melt the butter on low heat in this same pan (so you get the flavor of the sausage in the cheese sauce) and then add the milk or half-n-half (depending on how heavy you want it to go) one cup first.

Mix in the sausage with the pasta.  Then pour the cheese sauce and mix this well into the pasta and the meat.

Bake for approximately 30-40 minutes (depending on your oven) until the top layer of cheese melts and the panko is golden brown.  Pasta may bubble a bit from the cheese sauce.

Like Loading...
13 Dec This entry was published on December 13, 2014 at 10:15. It’s filed under American, recipes, series, The Gastronome and tagged food, mac and cheese, recipes, spicy mac and cheese. Bookmark the permalink. Follow any comments here with the RSS feed for this post.