I actually love tea more than coffee even though I have all the apparatuses for a good cup of coffee.  There are so many teas out there that it’s impossible to list them all, but I would love to start documenting as many teas that I can taste!  Intermezzo Cafe near Dunwoody has a fairly extensive tea selection, I believe it has about 30 to 40 teas, maybe more.  There are teas that I definitely do not have a taste for.  Perhaps it is my already-biased tongue, but it’s safe to say that I have a very particular taste.  While my tastebuds (and tolerance) for various foods has changed drastically since 2012, I will do my best to at least taste and savor the food/drink at hand in an attempt to give as good of an account as I can.

The foodie must live on! 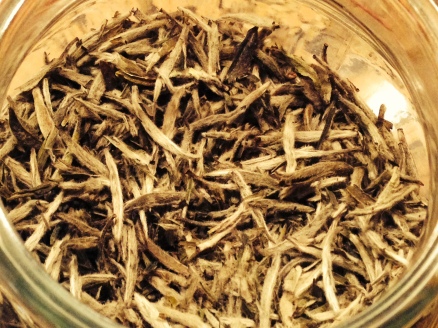 Last week I brewed a lot of white tea, Silver Needle to be specific.  Like coffee, tea (leaves) are distinguished by the amount of “processing” prior to making the beverage.  White tea begins with an unopened bud from the camellia sinensis plant.  It is then withered and dried to form white tea.  If you look closely at the picture above, you can see a white fuzz on some of the tea-leaves.  The tea buds are selectively chosen for what can give the most “white fuzz”.  Maybe this is why it is so expensive (price coming up later)…

I believe that white tea though may not be as beneficial as green tea  given that it is not oxidized as much and may not have as much anti-oxidant properties as green tea.  However, white tea does have established amounts of polyphenols that have proven to be anti-cancerous in non-humans.  That doesn’t really help us too much but hopefully future studies will prove otherwise.  Now there are some places that will say there is a green Silver Needle tea and then there is a white Silver Needle tea.  I personally have never had a green Silver Needle tea, only the white, and the white tea is delicious.

I was first introduced to it awhile ago at Teavana.  Yes, a tea chain store introduced me to white tea.  If you ever really want to get into tea though, I would recommend starting at this store.  The majority of their workers are actually very knowledgeable about tea.  In addition, Teavana has a “tea bar”, similar to that of Starbucks.  *Quick fact: Starbucks has now acquired Teavana*.  Their tea is freaking expensive though.  It is more expensive than a venti-sized cup of coffee.  However, I believe that because it can be customized, and honestly I feel like it requires more skill to make a good cup of tea, it is somewhat worth the higher price. (somewhat).  Majority of coffee and expresso drinks are made by machines, but tea depends on the amount of tea, the ‘flash rinse’ (for some), the brewing time, and more complicated would involve the various combinations that you can brew separate or together of other flavored teas to completely change the flavor of the tea.

For example, I brew a plain and simple Silver Needle tea at home for about 4 minutes, with hot water from a Japanese water boiler set at 180F.  Because these buds are picked at their youngest, they are much more fragile than other tea leaves.  You do not want to over-steep your teas as it leads to too much pungency.  White tea has a very clear, simple, and clean taste to it.  I personally like to mix a little bit of Emerald Surprise tea.  Both of my teas were obtained from Market Spice, a fairly extensive yet moderately-sized tea and spice store at Pike’s Market in Seattle, WA.  (yes, that is how much I love my teas).  It was not cheap, but it is so worth it.  For example, their Emerald surprise tea is $43.95/lb!! (Their Silver Needle White tea is $112.95/lb!!) However, it’s contents of “Chinese Dragonwell Green Tea, Pineapple gems, Orange Peel and Mango flavoring” adds a nice flavor to the Silver Needle tea.  I only add about half-a-pinch to the same brewing meshball that I fill half-way with Silver Needle.  After five minutes, I add honey to taste.  Sometimes I want to go for a more sweeter taste so I add more honey.  I never use sugar anymore either.

If you are looking for a nice clean taste of tea, healthy benefits, definitely give this a shot the next time you’re in Teavana.  They might not have that Emerald Surprise tea, but you can ask them for a mix-in of a citrus-like tea to add a bit more flavor.

Like Loading...
28 Feb This entry was published on February 28, 2014 at 13:06. It’s filed under tea, The Gastronome and tagged beverages, drinks, silver needle tea, tea, white tea. Bookmark the permalink. Follow any comments here with the RSS feed for this post.