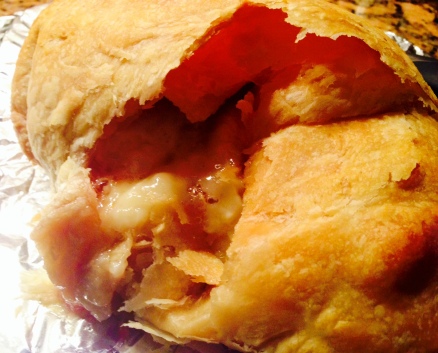 Brie is a soft cow cheese that originates from France.  It has a slightly pungent taste to it and comes with a soft creamy off-white center and a slightly harder white outer moldy rind.  I honestly eat it all but some people prefer to just eat the middle.  I normally use a double-cream brie, but the triple-cream version is better to be eaten by itself.  For one, brie is already soft and flowable as it is.  Two, combine it with the heat of the oven and a triple cream would literally be a melting lava pool of cheese.  More information on brie can be found on Wikipedia.

This takes minimal prep time and a slightly longer bake time.  However, it is so easy that it lets you do other things after the assembly and while it is cooking.  I like to serve it with apples, but for a more “decadent” serving, rich buttery crackers can be used as well.  I also used the generic Kirkland wheel that I found at the neighborhood Costco, but if you have a more discerning palate, you could go higher or lower depending on your budget.  As I only had a small party of three that would be consuming the brie, I cut the wheel in half (more brie for me!), and only used one pastry sheet which was more than enough to cover the half.  Are you ready? Let’s go!

Preheat the oven to 400 degrees Fahrenheit.

Take the half wheel of brie and slice it horizontally thru the cream center. 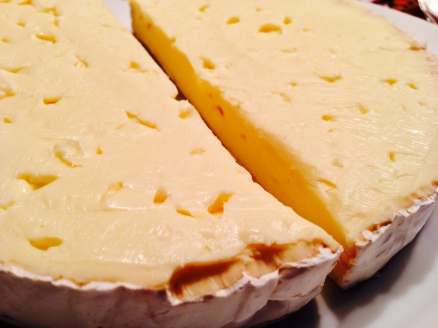 Place one half of the brie, cream side up, onto the center of the puff pastry.  Orient so that you will be able to completely seal the puff pastry if you were to place the second layer of brie on top.

Place a layer of jam or preserves of your choice on top of the cream layer of the first piece of brie.  Cover with the second piece of brie, cream face down. 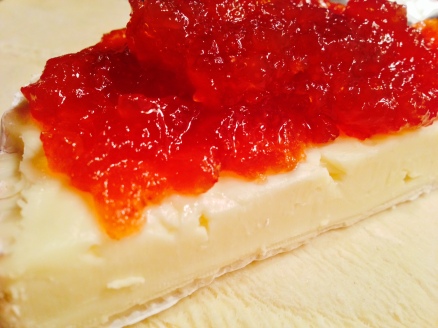 Flip over the sealed-side of the wrapped brie and place it with the sealed side down onto a baking pan lined with aluminum foil.  I chose to lightly brush some olive oil on top but this is not necessary.  You can also use melted butter. (If you have a flat serving dish that is oven-ready, you can use that instead.) 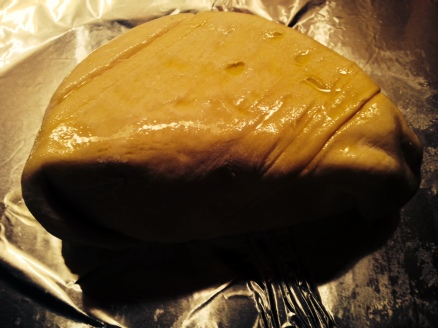 Bake for approximately 40-50minutes or until puff pastry is golden brown and flaky. 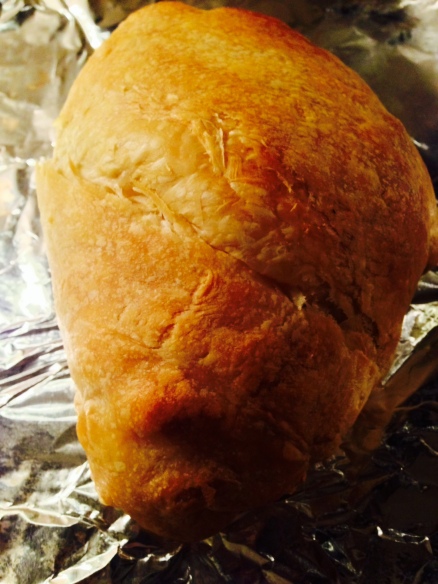 Like Loading...
20 Feb This entry was published on February 20, 2014 at 13:10. It’s filed under bakings, recipes, The Gastronome and tagged baked brie, recipes. Bookmark the permalink. Follow any comments here with the RSS feed for this post.