On this rainy weekend in November, A. and I headed cross-country to Seattle, WA for one of my best friends’s wedding.  We scheduled about two days to do a quick tour of the area with Saturday night reserved for the wedding.  Before we left for our trip, I had tried to do some research on things to do in Seattle.  My last trip to this city was when I was twelve, and I don’t remember much other than the Space Needle, a tour bus, and some stone steps in Victoria, B.C.  Needless to say, I had to find something food related.

One of the first things that I came across the internet was the Savor Seattle Food Tours, #1 thing to do while visiting Seattle, WA on Tripadvisor.  I had never used Tripadvisor before, but the reviews for this one particular tour was pretty high.  It was about $39 per person, but it would last over 2 hours at Pike’s Place Market – a fresh market that was infamous in Seattle, WA.  It boasted of delis, fresh fruit and vegetable stands, local companies selling everything from honey and beeswax salves to chocolate dipped dried cherries.  This tour was supposedly a must-do and would take us to the highlights of the market as well as….(you guessed it) feed us!  Samples would be given at each store without having to wait in line as well as a brief history of the market and the stores that we went to.  Not to mention a discount card of 10% was given to us at the end of the tour to be used at those same stores as well as a list of 20+ restaurants in the nearby streets for the next 10 days!  What a GREAT bonus for a trip! 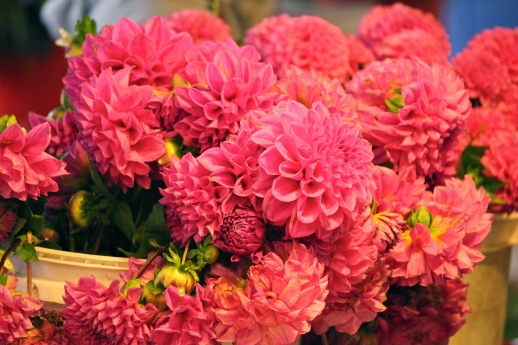 I am sure that I will miss some of the stores that were on this tour, but I will try to highlight as much as I can remember.  I will at least get the foods that tasted fabulous on this trip!

Smoked Salmon / Salmon Candy: I love smoked salmon.  I love it on a bagel with cream cheese or by itself.  And what better place to try smoked salmon than at the Pike’s Place Fishmonger’s stall at the market!  We managed to try three different samples of smoked salmon: 1) garlic 2) heavy smoked (not sure with what wood and 3) salmon candy.  There was definitely more of a salmon taste to the smoked salmon compared to that bought at Trader Joe’s or WholeFoods.  For some reason, packaged smoked salmon has an incredibly high salt content.  This salmon tasted lightly salted, lightly smoked and medium fishy flavor.  This fishmonger’s stall is right at the very opening of the market – you can’t miss it.  You also get 10% off and they also pack and ship products for you if you wanted to buy something to take home but didn’t want to stink up the plane.  Their salmon candy is a bit on the salty and milder side compared to that of the San Francisco Fish Company down at the Ferry Building Farmer’s Market.  I have to say, I think I like the SF version of salmon candy better because it tastes like it was smoked with a honey or maple glaze and actually tastes more like “candy”.

Beecher’s Cheeses:  this is a local store that makes its cheese in the window right next door to the actual store.  Their signature cheese is their Flagship cheese which is a mixture of cheddar cheese.  Our samples consisted of 1) Flagship cheese wedge on a multigrain cracker and 2) Flagship mac-n’-cheese! The mac-n’-cheese is by far the best that I have ever tasted in the United States of America.  It is creamy and covers the penne pasta perfectly.  Not to mention, it is just the right sharpness for the dish.  Served hot, it is a must!  I had actually returned to the market the next day to purchase some Beecher’s flagship cheese, but this time I purchased the smoked Flagship as my sister really likes smoked Gouda.  It keeps for a month at least without opening the package and I cannot wait for her to come home for Christmas to try this!

Pike Place Chowder:  the acclaimed boston clam chowder that won 3 national chowder championships in a row and was then banned from re-entering the contest a 4th year because it was a rule that no one chowder/company or group could win more than three times in a row.  They had taken their chowder all the way to the East Coast where it even rivals that of its origin.  The flavor is distinctively that of a delicious Boston clam chowder but better! There is absolutely no separation of liquid and “chowder” – sometimes with some clam chowders, there is a separation of runny chowder at the top and a thicker bottom chowder.  This is equally consistent in texture.  Not to mention, there is a nice amount of potato – not too overwhelming like some places that try to compensate by putting in a cheaper vegetable as to skimp on the seafood.  There were nice large chunks of clam in each of the sample cups as well.  We also sampled the seafood/salmon chowder – this is more orange in color and has more of an overall “seafood” flavor to it.  Some people mightsay that it is more “fishy” tasting.  I actually liked this quite a bit too, but then again, I am a seafood lover!  There were nice bits of fish and oyster in this chowder, and it has a bit of a tomato base to it, less cream and potato than the clam chowder.  But if I had to choose, I would probably recommend the clam chowder.

Piroshky Piroshky: This is essentially a western version of an enlarged stuffed dumpling.  The dough is kneaded and then specially filled with all sorts of sweet and savory stuffing.  Some of them include: spinach, cheese and egg; bacon, cheese, and egg; apple and cinnamon.  There is about 20 different types of piroshky, and all piroshkies are hand-made at this store and served hot.  You can see a lady stuffing all the piroshkies in the window next to the cash register.  On the tour, we tried a potato piroshky and an apple-cinnamon piroshky.  Both were absolutely delicious.  On the second day when we returned, A. and I shared a cranberry apple piroshky and a spinach-egg-cheese piroshky.  We both agreed that the savory spinach piroshky was much better than the fruit-filled danish.  It was just a little too sweet for our tastes – my guess is that they added a bit of sugar to the filling without thinking of how much the sugar from the fruit itself would contribute to the overall taste.

Pucker’s Cherries: a local farmer that specializes in dried cherries and chocolate-covered cherries.  This was not my favorite part of the tour, but then I have less of a sweet tooth than most people.  I like plain dried cherries with nuts, but the chocolate kind of turned me off.  The sample consisted of a cherry salsa which was actually really good.  If you tend to have a palate for sweeter salsa (like mango salso), this is definitely something that you will want to try.  Other chocolates include a dark chocolate, a milk chocolate, a white chocolate, and some other chocolate-covered cherry that I cannot seem to remember.  Not too big a fan of chocolates essentially means that I chowed these all down pretty quickly in hopes of moving on to the next tour location.

Fresh fruit: we had stopped by a local grocer’s stand as well to sample some fresh apples and pears from the orchards located in the eastern part of the state.  The apples were seriously to die for.  I normally do not like Honey Crisp apples and would prefer a Fuji apple over other apples because of its crispiness, but the local Honey Crisp apples had the texture that rivaled that of my beloved Fuji.  A., who is mildly allergic to apples and other cored fruits, was willing to undergo an itchy mouth for the rest of the day to try these samples.  We also had a sample of the asian pears that were grown in the region, and they were pretty good too.  I don’t know if it’s the concept of them being locally grown or being “fresh”-er than that of H-mart but they just tasted so much better, so much juicier than that in Atlanta.

Etta’s crab cakes: There is a reknown restaurant towards the end of the market known as Etta’s.  I’m not sure of the entire background, but I believe that the chef who opened Etta’s was really famous.  The crabcake was pretty delicious.  Then again, with having a fresh farmer’s market right at your door, it would be impossible to make poor-tasting food with such fresh ingredients.  Not to mention, there is an abundance of crab that is brought in and therefore, you know your crab cake is going to be made of seafood that was not salted and iced in a box that was caught 3 days ago.

All in all, a summary:

I would seriously recommend this food tour to anyone visiting Seattle, WA.  Not to mention, the hotel that we stayed at was very very convenient.  I got a room upgrade for being sick and actually had a hot tub IN my room!  Not to mention, there was a local shuttle than ran every 30 minutes that took you to local places downtown and also picked you up to the hotel.  We didn’t know this at the time, but there is also a light-rail that you can take to the airport so you will not need to get a rental car if you stayed at this hotel.  The hotel is located next door to Safeco Field so if you try to plan it where it’s on a weekend where a game is not playing, then you’re pretty safe when it comes to noise.  The hotel is called: Silver Cloud Hotel – Stadium.

If you wanted to try this tour for yourself please check out this link: Savor Seattle Food Tours

Until the next time, bon apetit!

Like Loading...
13 Nov This entry was published on November 13, 2010 at 15:43. It’s filed under markets, The Gastronome and tagged food, Pike's Public Market, Seattle. Bookmark the permalink. Follow any comments here with the RSS feed for this post.